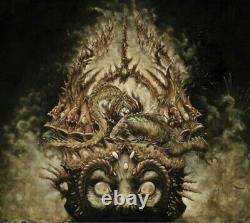 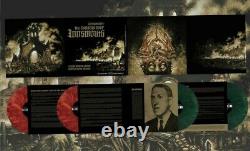 Newly commissioned art by Jeremy Hush. In the pantheon of Howard Phillips Lovecraft's writings, perhaps no work so explicitly expands the Cthulu mythos as that of his 1936 novella.

Narrator Robert Olmstead's relation of an unplanned excursion to the forgotten and dying New England town of Innsmouth reveals much of the Deep Ones and Dagon, and a not a little of Cthulu and shoggoths. Thus is this full-length, unabridged reading by Andrew Leman so involving. Whereas Leman's reading of. At the Mountains of Madness.

Primarily saw him taking on the voice of Dr. William Dyer, here he voices multiple characters, in many different states of mind and sanity. Going from the patrician, high-minded tones of Olmsted to the whiskey-fueled, New England-accented remembrances of Zadok Allen shows the full flush of Leman's talents, and gives.

The feeling of a full cast performance. The continuous decline from our narrator's initial thrill at exploring the highways and byways of rural New England, right through to his horrific final discovery and decision, never lets up, either, resulting in a listening experience which makes this major entry in Lovecraft's bibliography feel new and exciting once more.

Said excitement is also due to the work of composer Chris Bozzone's score for this adaptation. Much like the composer used the tones of wind blasting across the Antarctic tundra for his sound design of At the Mountains of Madness, so does he here lean into the damp decay and squelching wetness of the town of Innsmouth. The sound of waves washing upon the shore is never far away, even as insistent chimes, ringing bells, or frantic piano plays over them.

While the bulk of Bozzone's score is in washed sounds or in high-pitched but still-quiet tones, it is when narrator Olmsted is forced to make his escape that the music ratchets up in volume and speed. As he attempts fleeing the Gilman House and then, the town, the score becomes akin to something like a cross between an action film and horror, not unlike the more terrifying portions of It Follows. The bass tones are so faint as to be inaudible, yet so powerful that one feels them in their bones. The sounds have force to them, no matter what the volume. The resulting combination of words and music means that.

Is a recording which excites and delights, while still evoking the pervasive sense of unease so integral to a Lovecraftian tale. As Olmsted asks in the waning moments of the novella, Where does madness leave off and reality begin? Lovecraft The Shadow Over Innsmouth 4x LP Andrew Leman Chris Bozzone" is in sale since Saturday, November 20, 2021. This item is in the category "Music\Vinyl Records". The seller is "mclure91" and is located in Independence, Missouri.